Didn't we do well! 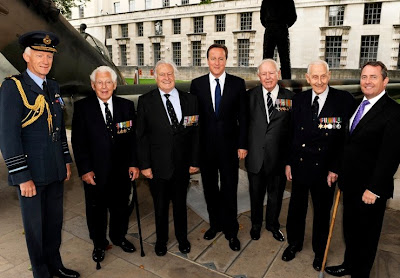 The Heritage Industry is in full spate today, celebrating "Battle of Britain day", and in particular the 70th anniversary of the battle.

As always – seen from the picture above – the politicians are getting in on the act (give them an "act" and they'll climb into it, with not a scintilla of shame), but in so doing they perpetrate a pernicious myth that hands credit for what actually amounts to a famous victory to a self-serving élite, and completely distorts an important part of our history.

At the core of all this, of course is the myth of the "Battle of Britain", with the "battle" capitalised. At the time, it did not exist, was not recognised as such and only came formally into being in April 1941 when the Air Ministry published a pamphlet with that title. Even then, the start point was 8 August and it was not until later that it was revised to the arbitrary date of 10 July.

The "self-serving élite" at the time was, of course, RAF Fighter Command – not "the few", who were just the expendable pilots, the cannon fodder, but the institution. At that time it was locked in mortal combat with the real enemy, Bomber Command. It was threatening to achieve what the Luftwaffe had failed to do, the abolition of Fighter Command.

It was the "invention" of the Battle of Britain which made this a political impossibility, and that involved branding a very limited part of the overall battle, and vesting the ownership with Fighter Command. Thus pilots who flew with Bomber or Coastal Commands during the period chosen do not qualify for membership of the "few" because the "brand" is exclusive to Fighter Command.

The more important issue, though, is that the real Battle of Britain lasted much longer than the very short period claimed by Fighter Command. Furthermore, it actually comprised three phases. The first started on the first day of the war – the "blockade" phase - which continued through until 1942 when we finally achieved a victory.

The second phase, running contiguously, is the classic "air superiority" phase, but it actually lasts from about 8 August until 6 September 1940, the next day being the day the Luftwaffe bombs the Port of London and the start of phase 3. In the general hagiographies of the battle, bombing London is seen as the great mistake by Hitler, and the one that saved the RAF and therefore Britain. Without German air superiority, the threatened invasion could not go ahead.

But actually, the mistake was going for the RAF in the first place. This perhaps reflected the hubris of the moment and the half-formed but totally unrealistic plan for an invasion of Britain, which was never a practical proposition. Thus, while the battle for air superiority raged, wiser heads prevailed, affirming that the invasion was a non-starter. A more certain way of taking Britain out of the war - it was thought - was to attack the people in the cities.

At this time, the prevailing theory of air warfare was that nations could be brought down by strategic bombing, the main effect being to erode public morale to such a great extent that that functioning of the cities would collapse and the governments would be forced to sue for peace.

Hitler and those around him reasoned that Britain – and the British Empire – was a corrupt, decadent, class-ridden society on the verge of collapse. It only needed a small push (in the form of the Blitz) to make that happen.  In fact, he was wrong – but not far wrong. British society was torn by huge stresses and, under the weight of the bombing and the blockade, it very nearly did collapse. It was a very close-run thing, far closer than people want to admit.

The reason Britain did not collapse was, in small part due to the PR genius of Winston Churchill. But in the main part it was due to the perseverance and endurance of all those organisations which kept the fabric of society functioning, from the civil service, local authorities, the fire services, civil defence, hospitals, the nursing service, the Womens' Volunteer Service, and many, many more – plus, of course, the people themselves.

What is so often called the Blitz was the main part of the Battle of Britain - it was phase 3. It was the battle for the hearts and minds of the British nation, fought by the entire British nation, which endured until May 1941. It was then that Hitler turned his attention eastwards and withdrew the bulk of his forces in preparation for the invasion of Russia.  The phase two of the battle was an irrelevance, a strategic impasse. The "few" and their counterparts in the Luftwaffe were fighting a meaningless battle.

Seen in this context, the Great Churchillian Soundbite – "never in the field of human conflict has so much been owed by so many to so few" is exactly the opposite of reality. Given that those most at risk were the privileged élites, it would be far more accurate to say that never had so few owed so much to so many – a debt they were never to repay.

That is not in any way to disparage the actions of the fighter pilots, or to take anything from their raw courage and heroism. It is simply to put their endeavour in perspective. The battle as a whole, the real battle of Britain, was a battle fought and won by the people – the many. In truth, it was won more in spite of, rather than because of the actions of the government.

It was our battle, our victory. And didn't we do well!

COMMENT: Battle of Britain thread
Posted by Richard at 14:15