I think we said that 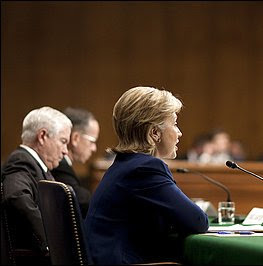 Referring to the daily stream of truck convoys that bring supplies into the landlocked nation, Hilary Clinton said to the Senate Armed Services Committee:

"You know, when we are so dependent upon long supply lines - as we are in Afghanistan, where everything has to be imported -- it's much more difficult than it was in Iraq, where we had Kuwait as a staging ground.

You offload a ship in Karachi. And by the time whatever it is - you know, muffins for our soldiers' breakfast or anti-IED equipment - gets to where we're headed, it goes through a lot of hands. And one of the major sources of funding for the Taliban is the protection money. That has nothing to do with President Karzai."

Yup! That's precisely what we said on 3 September and then again on 13 September of this year , on the blog and in the Booker column.

As we pointed out – it is all done under a doctrine of "plausible deniability". We do not pay the Taliban – oh no! But we build their payments into the contractors' fees, which they then pass on, to ensure safe passage.

And we think we can win this "war", the way we are fighting it? With due respect to the current CGS, he is whistling in the wind.