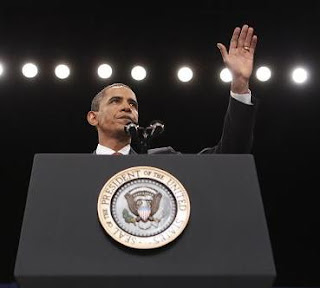 The time zone difference between the United States and the UK meant that the Obama speech yesterday was broadcast here in the wee small hours, allowing only the briefest of analysis (and a trans-Atlantic conference call) before Morpheus cast his spell.

With the benefit of some hours of reflection, however, the "strategic review" announced by Obama looks no better than it did when he delivered it. The deployment of an extra 30,000 troops for a short period – with withdrawals planned in 18 months – appears to be exactly what it is: an Afghan "surge" on the Iraqi model. It is an attempt, as we observed at the time, to impose a military solution on a strategic problem, which has no military solution.

The newspapers today were nevertheless full of the news of additional troops, with The Daily Telegraph, amongst others, hailing a planned "new onslaught" against the Taliban. Even now, though, there are reservations about the target date of July 2011 to begin a reduction of US forces and the transfer of security to Afghan security forces. This, it is felt, would enable the "enemy" to lie low and wait for the departure of US and Nato forces.

Nevertheless, graphic accounts of the derring-do of British and American troops will fill the pages of newspapers to come, and various commentators will be claiming progress has been made. But that will be an illusion.

Attempts to suppress violent dissidence have marked the entire history of Afghanistan. Most often, they have been conducted with greater troop numbers and a degree of brutality which modern nations could not even begin to consider, and they have largely been marked with transitory successes.

Military expeditions, by sheer weight of numbers, have been able to suppress unruly tribes, and bring peace of a sort – sometimes for decades. What no one has been able to do, however, is break the cycle – sooner or later, the violence has always returned. Obama, therefore, is treading in the footsteps of previous rulers and conquerors. His army will prevail, for a time, and then the deadly cycle will re-assert itself, We will be back where we started.

One imagines, therefore, that this is part of a deadly game of make-believe. That Obama is striving for the semblance of victory, a period of sufficient calm that will enable him to declare a "job well done" and retire with honour, distancing himself from the inevitable consequences.

Perhaps though, this is unduly cynical, as the "strategic review" is more likely driven in equal parts by ignorance and wishful thinking – mostly by an over-simplistic idea of the nature of the conflict and its drivers, and an exaggerated belief in the capabilities of the coalition to effect change.

Obama's problem, shared by the rest of the coalition members, is that he is not fighting one war – whether it is called an insurgency or not. Rather, the coalition is standing in between a myriad of local, tribal and ethnic squabbles, overlaid by regional disputes, complicated by a further overlay of global jihad, the whole reinforced by criminal activities which feed off instability and lawlessness, on top of which there are extreme social tensions which manifest themselves in violent conflict.

In short, this is not one war but many, some separate, some inter-related, some different but sharing causality, some arising as a consequence of more general disputes. And in this mix, the ignorant interfere at their peril. Well-intentioned attempts to resolve issues are as likely as not to make things worse as they are to improve them.

And it is this ignorance which seems to be at the heart of the Obama strategy, one that is, unwittingly, set to do more harm than good. To explore its weaknesses, however, it going to take more than a few separate posts, which will follow this in a planned sequence, from which we hope to offer some means of resolution and hope for the future.

As it stands though, one can only observe that the Obama strategy is an absolute disaster, one doomed to failure. If it is allowed to develop, without considerable alteration, untold misery will result.