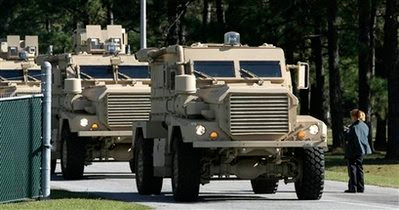 Yesterday we get an announcement by John Hutton on the new package of armoured vehicles for the Army (set up by his predecessor, Des Browne).

Names are given, but few details, especially the "Husky: TSV (Medium)" and the "Coyote: TSV (Light)." The former, we are told is are "Medium armoured support trucks - carrying out the support roles in lower threat areas and where heavy vehicles, like Mastiff, cannot be used." The latter are "Light armoured support vehicles - supporting Jackals across the harsh terrain of Afghanistan."

Then, today, we get an announcement from Force Protection in Ladson, South Carolina – makers of the Mastiff and the Ridgeback, ordered by the British Army, and the Buffalo, which has also been ordered.

This was to introduce the new version of their "lightweight" MRAP, the Cheetah (pictured), weighing in at a mere 8 tons. With the current version of the RG-31 (Mark 6) now having inflated to an obese 11.6 tons – from the original seven, the Cheetah is currently the lightest MRAP available, yet its manufacturers claim for it similar protection levels to those of the heavier Cougar.

Looking at the photograph, the ECM dome on top of the cab looks suspiciously … er … British. Are we looking at a Husky or a Coyote, perhaps?