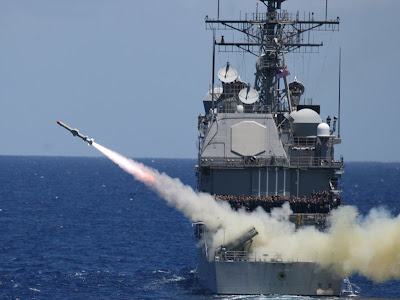 The guided-missile cruiser USS Lake Erie (CG 70) fires an AGM-84 Harpoon anti-ship missile while under way in the Pacific Ocean July 11, 2008, during Rim of the Pacific (RIMPAC) 2008. RIMPAC, we are told, is a biannual exercise hosted by the US Pacific Fleet that brings together military forces from Australia, Canada, Chile, Peru, Japan, the Netherlands, Singapore, the United Kingdom and the Republic of Korea. DoD photo courtesy of the US Navy (Click pic to enlarge).

Interesting how the matelots are lining the firing platform to watch. They must be pretty confident the missile won't misfire.
Posted by Richard at 00:02