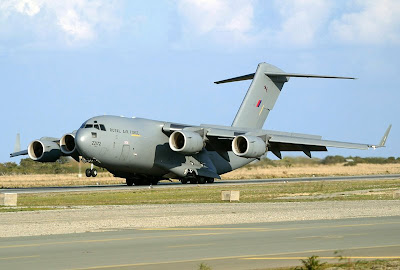 One of the many things which makes commenting on defence policy so very difficult these days is the absence of any balanced – or sensible – commentary in the media. Defence, as an issue, has become just another "stick" with which to beat an unpopular Labour government, fuel for the ongoing soap opera which now dominates political discourse.

A classic example of that dynamic comes today in a short piece in The Sunday Times, accusing the government of having "squandered" almost £500m by leasing RAF C-17 transport aircraft that could have bought outright for less money.

This is Mick Smith writing and, in principle, he is right. If the figures cited are accurate, the MoD paid a total of £769m to lease the aircraft and then – as Smith puts it – "had to buy them anyway for an additional £220m." The final payment was made last month, putting the total price over eight years at £989m, when they could have been bought originally for £520m.

According to the Smith legend, the MoD wanted to buy the four Boeing C17 Globemasters, but "was told by Gordon Brown, then the chancellor, to lease them because it would be cheaper". But that is just another of those distortions that hides the real – and more interesting - story.

In fact, the story goes back to the Strategic Defence Review in 1998 and the Short-Term Strategic Airlift (STSA) competition, which started in September of that year.

As set out by the Defence Procurement Agency (DPA) to the Defence Committee, the longer term needs were being addressed by the Future Transport Aircraft but, in the interim, there was a short-term gap which needed filling.

Thus, an invitation to tender was issued on 30 September 1998 to eight potential bidders, with a deadline for tenders of 29 January 1999, coinciding with the deadline for a four-nation collaborative competition which would identify the solution for the Future Transport Aircraft (A400M), requirement.

The two competitions were linked and were to be assessed in parallel, both to consider the most cost-effective solution overall and to ensure that the solution chosen for STSA did not prejudice the FTA competition.

In January 1999 five bids were received from Boeing/BAe (C-17), Air Foyle (Antonov An 124-210), IBP (Antonov An 124-100), Airbus Transport International (a mix of Beluga and A300 freighters) and Rolls-Royce offering a fleet management service of MoD acquired assets.

None of the bids offered an acceptable combination of capability and cost and the competition was abandoned. Options were then limited to a C-17 solution with support provided by USAF and the charter of Russian An 124-100 aircraft.

By 16 May 2000, the MoD has decided that the best solution to meet the short-term strategic airlift requirement was to lease four C-17A Globemaster III aircraft, while the Airbus A400M was selected to meet the longer-term requirement. On 2 September 2000, a contract with the Boeing Company was signed for the lease of four C-17 aircraft for a period of seven years, with the option of extending for up to a further two years,

At the time, the C-17s were leased to meet a short-term requirement, pending the introduction of the A400M, which was then expected to come into service in 2009. At the end of the lease period, the intention was to hand the aircraft back to Boeing. There was a purchase option in the contract but, as the DPA affirmed, there were no plans to retain the C-17 aircraft once A400M was in service.

It has to be said that, at the time, no objections were raised by the Conservative opposition and, in a subsequent NAO report, the arrangements were commended as "significant innovations" which illustrated "the scope for innovation and well managed risk-taking encouraged by Smart Acquisition."

Of course, following the lease, we had 9/11, the war in Afghanistan and then Iraq, when the airlift capabilities of the RAF were stretched. Then, as delays mounted to the A400M project, two things became clear. Firstly, A400M was not going to be in service early enough to provide for the ongoing airbridge requirements and, secondly, the C-17 provided a capability which would not in any event be satisfactorily performed by the A400M.

Under those circumstances, it made absolute sense to convert the leases into firm purchases, which the MoD did, in addition acquiring two more machines at the cost of £130m each.

With the benefit of hindsight, it would have been better to have bought all the aircraft outright, and we would have preferred the MoD to have bought a fleet mix of C-130Js and C-17s, rather than the A400M. If there was a mistake, therefore, it was in selecting the A400M – from which the STSA requirement stemmed. Yet, when it comes to that "mistake", the Conservatives were silent.

Thus, to accuse the government of "squandering" money is simply not a fair or reasonable interpretation of events. It is simply cheap journalism.

Neither is it right to condemn the lease deal as "an absolute shocking waste of public money when our troops are going without the equipment they need", as does Gerald Howarth, the Conservative defence spokesman - courtesy of Smith's piece. That requires a re-write of history and a complete misrepresentation of the original situation.

The point is that there are plenty of things over which this government can be justly criticised but to rely on such low grade misrepresentation merely trivialises the defence debate and demeans those who indulge in it.