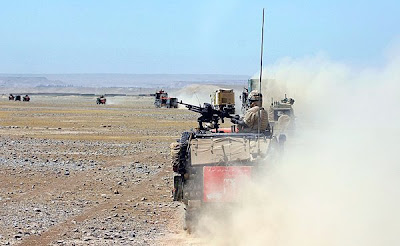 Details coming in of the deaths of three soldiers from 1Bn The Rifles point to the continued misuse of resources and equipment in the Army, leading once more to unnecessary deaths.

According to The Daily Telegraph, the three were killed while riding in an open-topped Wimik Land Rover, when they were hit by an IED just east of the town of Gereshk in Helmand province.

What is particularly relevant here is that the vehicle was being used as part of the escort for a supply convoy, making it highly vulnerable to attack, while negating any of the claimed advantages for this type of vehicle.

The essence of a Land Rover Wimik is that it is a lightweight, highly manoeuvrable gun-platform. The emphasis is on mobility, therefore, rather than armoured protection, the theory being that the vehicle is not tied to roads or any specific routes. The crew can choose unpredictable routes, and avoid potential ambush points, by which means the mobility afforded is judged to offer as much or greater protection than conferred by armour.

Even that theory is arguable. On the one hand, the Taleban have become adept at ambushing vehicles when they are travelling to and from operations, when they are tied to fixed routes and lose the advantages of off-road mobility. Then, crucially, it makes a false distinction between mobility and protection, as if they were mutually incompatible, which they are not. 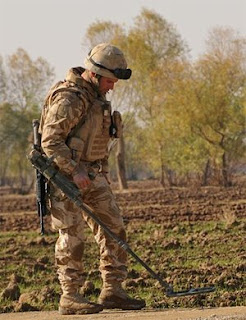 Where a vehicle is involved in escort duty, however, even the theoretical advantages disappear. Supply convoys in that region are often laboriously slow, with typical average speeds of 5mph. Their routes are predictable and their slow progress gives the Taleban plenty of opportunities to get ahead and prepare ambushes.

While it is possible – and standard practice – to carry out explosives searches at "pinch points", these are carried out by the British Army with dismounted troops using hand-held mine detectors (pictured left) and dog teams. They are laborious and slow, with checks often having to be cut short or omitted to avoid delaying the convoys – where hold-ups in vulnerable positions carry their own risks of ambush.

Under such circumstances, Wimiks and the like should never be used as escorts. Even within the frame of reference dictated by the Army, they are patrol vehicles and light gun platforms. They were never designed for convoy duties and are not safe for that purpose.

Nor should any convoy be required to travel through hostile territory without route clearance and proving. Dismounted techniques, being too slow – and dangerous for the clearance teams, who are themselves prone to ambush - purpose-built vehicles are essential.

Such use was, of course, pioneered by the British and, as we have often observed on this blog, copied by US forces and the Canadians, where such route clearance is routinely carried out in Afghanistan. Now, belatedly - having sold off its own vehicles ans sat on its hands for six years - the MoD is at last buying replacement vehicles, the so-called "Talisman" package. Unfortunately, this is not due to start coming on-stream until next year.

Belatedly, also, the MoD has just issued a "contract notice" inviting expressions of interest from manufacturers prepared to supply "up to 400 Light Protected Patrol Vehicles (LPPV)".

The LPPV, we are told, will be a wheeled vehicle with an estimated gross vehicle weight of around 6 to 7 tons, capable of carrying up to 6 crew (2+4), integrated with a range of communication and electronic equipment providing protected mobility. This, we are also told, will replace in-service light legacy platforms based on the Land Rover based SNATCH vehicle. Additionally, the platform may be used as the basis for the replacement to Land Rover WMIK. 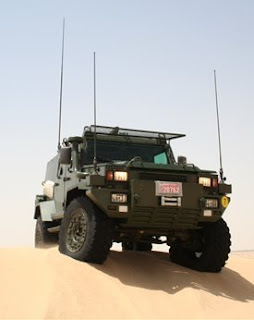 Interestingly – tragically – the tiny Irish Army has already resolved this issue, having at the end of last month ordered 27 mine-resistant patrol vehicles (LPPVs by any other name).

These are the BAE Sytems/OMC RG-32Ms (pictured right), the smaller version of the RG-31. This is a vehicle the MoD tested in 2002/3 and rejected in favour of the less-protected Iveco Panther, which is still not in service.

However, the Irish, slow though they might be, do have an advantage. They do not have to contend with the MoD. This is the MoD's second attempt at buying an LPPV, the first being the ill-fated Pinzgauer Vector (pictured below left). And it is worth noting that, in June 2006, when the Army ordered its first batch of 80 Vectors, at a cost of £35 million, the intention – or so it was claimed – had been "to counter the threat posed by suicide bombers."

We were then told that it had been adapted for use in "high-risk" environments and would thus "protect troops from automatic fire, landmines and fragmentation bombs."

At the time, it was reported that senior officers believed the greatest threat to British troops would come from suicide bombers and insurgents "armed with the same improvised explosive devices that have been used against lightly-armoured vehicles in Iraq." Nothing has changed. 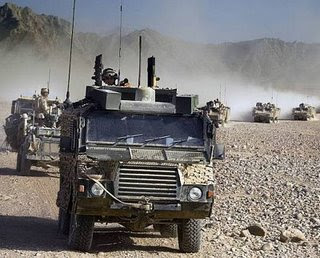 Nevertheless, as early as June 2008, less than a year after the vehicles had been deployed, there were hints of a problem. This came in a published list of "expected out-of-service dates" for a range of vehicles. The Vector was given a date of 2015.

In an Army that routinely keeps vehicles for 30 years or more, a mere seven-year service life was unprecedented. Then, by the end of the year, the Army had conceded that the vehicle was not up to the job, having proved inadequate, and unable to cope with the threat from roadside bombs - the very purpose for which it had been bought.

In December 2008, however, we had General Sir Kevin O'Donoghue, without so much as a blush, airily telling the Commons defence select committee, "You produce a solution for the requirement of the time; the requirement changes as the threat changes, as the security architecture changes and you need to produce something else." It hadn't changed - they got it wrong.

Now, more than three years after the Pinzgauer contract was first mooted, we see a "contract notice" inviting expressions of interest for a vehicle which will probably end up being something like the RG-32M or another vehicle that has been available for many years.

So, while the Army gets it wrong again and again - pouring money down the drain in the process - men have to die, again and again. And the MPs, who are supposed to monitor such things, have asked what?