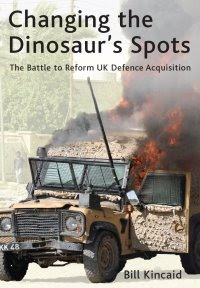 Having finally obtained a copy of "Changing the Dinosaur's Spots" to which I referred in the previous post, one smiles wanly at the "puff" on the back cover, from Vice Admiral Sir Jeremy Blackham, former deputy chief of the defence staff (equipment capability) MoD, who describes it as a "gripping read".

The book itself is written by Bill Kincaid, himself an "insider" who spent 18 years in the MoD, finally ending up as director of land systems operational requirements. He left in 1995 to start a "successful consultancy business". On his watch, therefore, Kincaid must have been involved in the production of the "Snatch" Land Rover – introduced in 1992 – an example of which he uses on the front cover of his book. Interestingly, he does not cite the vehicle as one of his personal successes.

As to the book, it took until page six to wonder whether Kincaid, who expends his energies on offering solutions to the reform of UK defence acquisition, is not part of the problem which he aims to solve. That thought is triggered by his early discussion of the propensity of the MoD to "save" money by deferring big projects, only to have them costs more later as a result of the delays. "This is relevant," writes Kincaid …

… to the UK's 30-year effort to deliver the Future Rapid Effects System (FRES), the replacement for the FV430 and the CVR(T) armoured vehicles – if we had not so repeatedly deferred them, they would have come so much cheaper in the early 1990s, when we had three thriving armoured vehicle manufacturers in the UK, and they would have been available for deployment in Iraq and Afghanistan with no need for the buys of interim vehicles.

There are so many things wrong with these statements that it is difficult to know where to start, not least in Kincaid’s suggestion that the FRES (or any) programme stretches back 30 years.

No doubt something must have been under discussion that far back, but the first formal declaration of interest in a new fleet of armoured vehicles to replace the existing inventory came in 1989. That project was not FRES. It was the Future Family of Light Armoured Vehicles (FFLAV) project, which had been revealed as an aspiration in 1987.

Neither was the in-service date specified for the "early 1990s" – the first vehicles then being expected for the mid 1990s, an objective which, even then, was highly optimistic.

With such a relatively short developmental time scale, it would even then have been highly unlikely that a completely new design could have been produced. The favourite, in fact, was the Piranha family – the same now being considered for FRES – to which effect, in 1990, the British armoured vehicle manufacturer, GKN teamed up with Mowag of Switzerland in anticipation of producing this vehicle for the British Army.

Had Bill Kincaid actually got his wish, and the Piranha had been introduced by the mid-1990s, indeed they would have been available for Iraq and Afghanistan. But that would have meant the British Army being saddled with vehicles very similar to the Canadian LAV, which has been far from an unqualified success.

Even a later version, in the form of the Stryker used by the US Forces in Iraq, has been less than successful. As a result, we have argued strongly that this type of vehicle is entirely inappropriate for low-level counter-insurgency operations, as indeed the Spanish have been finding.

What is particularly disturbing about Kincaid's comments, however, is assertion that, had these vehicles been bought, there would have been "no need for the buys of interim vehicles." By these "interim vehicles", he no doubt means the Mastiff and the Ridgeback, and the rest of the recently announced package.

The point here is that these are specifically designed for the MRAP role. They are not the equivalent of the FFLAV/FRES. That the US and Canadians have LAVs on their inventories has not stopped them re-equipping with MRAP vehicles. In fact, the US, with the largest inventory of LAVs, is well ahead of the UK in its MRAP programme.

Kincaid, though, is very much a player in the procurement debate. He works closely with the Royal United Services Institute – the "leading forum in the UK for national and international Defence and Security" – which has published his book. If his views are representative of more general thinking – and there is every reason to believe it is - then we are in serious trouble. Even at a superficial level, anyone who sees and equivalence between FRES and the MRAP programme simply has not absorbed the lessons of the counter-insurgency campaigns in Iraq and Afghanistan.

Reading on into the book, this very much confirms Kincaid's lack of grasp of the essentials of military procurement. He writes at great length about the MoD being an "intelligent customer", and offers a huge trance of text about downstream processes. Where he is totally deficient – and I do mean totally – is in any evaluation about how this "intelligent customer" decides what is needed.

Yet, the heart of the procurement failure stems entirely from the armed forces being kitted out with the wrong or inadequate equipment, primarily – or so it seems – because neither the military nor the defence establishment have any clarity as to what is needed. But neither, it seems, has Kincaid.

Thus, as he himself remarks, we end up relying on a UOR system which delivers the equipment to fill the gaps – as it did with the Mastiff. Kincaid might well complain that we also have a huge, inefficient establishment, but the trouble is that it expends its energy and money on generating its own ideas on what is needed, instead of finding out what is actually necessary to prosecute the wars we are actually fighting.

It is hardly surprising, therefore, that the procurement system ends up delivering the wrong kit at far greater expense than need be, but Kincaid has not even begun to work out why that might be the case. He may, therefore, want to change the dinosaur – but he too is a dinosaur.