This was not supposed to happen 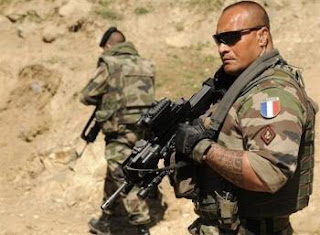 The well-planned attack (by all accounts) by the Taleban on French troops, which started shortly after midday on Monday, seemingly breaks the trend in a campaign which supposedly has moved into an asymmetric phase.

What further marks this out is the ferocity of the attack which had nine soldiers dead within the first minutes of contact, another dying the following morning when his armoured vehicle overturned Tuesday as the forces were leaving the scene. A further 21 soldiers were injured in the engagement.

That the fighting also lasted so long, despite the intervention of US Air Force assets and the arrival of reinforcements, was another apparent departure from current Taleban tactics. In the main, Taleban fighters usually disengage on the arrival of air power and are now rarely seen to stand and fight.

One other unusual factor was the proximity to Kabul – just over 30 miles – in a region which, by and large, has been considered pacified and which has not seen major Taleban incursions in the current phase of the campaign.

Details are as yet sketchy but, according to the IHT, the troops were on a reconnaissance mission in the mountains of Surobi, a militant redoubt 30 miles east of the Afghan capital, Kabul, when they were ambushed. There is no clear indication as to whether they comprised a foot patrol or were mounted.

The French daily l'Express identifies the troops as from the élite 8th Marine Infantry Parachute Regiment and the 2nd Foreign Legion Parachute Regiment but the Christian Science Monitor also reports that they were from a battalion that took control of Kabul only two weeks ago.

Whether inexperience was a factor in their selection as a Taleban target can only be speculation, but this can hardly have been an issue in the second attack mounted by the Taleban on the Tuesday. This was a mass suicide attack on Camp Salerno, the American base that serves as the logistics hub for the war's eastern front. It began just after midnight, when a team of attackers dressed in military fatigues were spotted on the horizon.

Afghan and US forces confronted the attackers some 1,000 yards from the base entrance, while fighter aircraft attacked the insurgent. Once surrounded, three suicide bombers detonated themselves, and three more were shot to death. A seventh was also killed.

However, rare though these overt attacks have become, last month saw a similar incident, when an estimated 200 Taleban stormed a small American "combat outpost" in the Dara-I-Pech district of Kunar province.

Nine US soldiers were killed, plus 15 US soldiers and four Afghan soldiers were injured. It was also claimed that the Taleban had sustained "very heavy losses". The fighting had started at 4.30am and US forces deployed mortars, artillery, Apache helicopters and fast jets. But, as with Monday's Kabul incident, the Taleban attack persisted, the fighting – according to contemporary reports - lasting well into the day.

For the Americans, this was their largest single loss since the fighting in Afghanistan in 2001 and, for the French – who have only lost 13 troops in the Afghan deployment – it is their largest in theatre and the biggest loss in combat for the French army since clashes in Bouake, Ivory Coast in 2004.

The high number of casualties prompted French president Nicolas Sarkozy immediately to board a plane for Afghanistan. In a statement before departure, he declared that, "In its fight against terrorism, France has just been struck severely," adding, "My determination remains intact."

Well he might say that as France is sending 700 more troops to Afghanistan this month, announced in April, during the NATO summit in Bucharest. The deaths could heighten domestic opposition to that plan – and to the continued French deployment.

So far, French media reaction to the deaths has been mixed. An online news article from Le Monde brought comment by one reader that the attack by 100 Taliban could be "foreseen" and asked, "When will we have a debate in Parliament on this?" An editorial in the “outspoken and independent” Rue 89 suggested that the "meaning" of the Afghan war has been lost to many French, and called for negotiations with the Taliban in a war that seems "endlessly protracted."

Should this current Taleban activity be part of yet another shift in tactics, that siren call could easily spread. One needs little effort to imagine the furore had ten British troops been killed in similar circumstances, and the media would undoubtedly be to the fore in calling for a withdrawal.

Already, this year has seen the deaths of 178 coalition forces, including about 96 US troops, there are predictions that the overall toll will surpass the record 222 troop deaths in 2007. With the BBC reporting that the Taleban are growing "more brazen" – words used in a number of media reports – and The Guardian warning that this incident will, "almost certainly shake resolve within an already nerve-racked Nato alliance," it is easy to see which way the narrative is going.

Despite confident pronouncements from the British military about winning the shooting war, therefore, we may be entering a new phase of the campaign which has the opposition from the home front stoked up to the extent where continued engagement becomes untenable.

A weak, unpopular government is going to have a hard time convincing the British population that it should expect still more casualties.