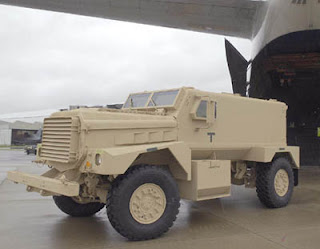 Good news this week was the delivery of the first of the batch of 157 Ridgeback MRAPs to Brize Norton, a month ahead of schedule. They will be fitted here with weapons, additional armour, plus radios, ECM and other theatre equipment before being despatched to Afghanistan.

That five were airfreighted to the UK by a chartered Antonov signals that a small battle has been won – the argument as to whether the whole batch of vehicles should be assembled before deployment, or whether they should be fed into theatre piecemeal, as and when they come off the production lines and have been kitted out.

So far, it looks as if the latter "school" has prevailed, and the vehicles will be rushed out as soon as they are available. 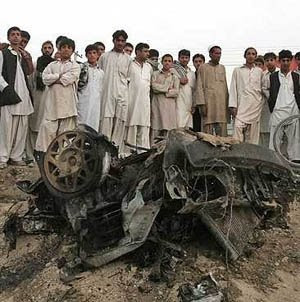 It is just as well that a sense of urgency is at last being impressed on the MoD for, last week saw another fatal attack on a British convoy, causing the death of Signaller Wayne Bland, from 16 Signal Regiment. Two other soldiers were also injured as their vehicle was targeted by a car-borne suicide bomber (pictured) while the troops were carrying out a route familiarisation patrol in Kabul.

According to The Sun - the only newspaper to have identified the vehicle type – Signaller Bland was riding top cover in a Saxon, one of three in the convoy when the bomber hit. Although the Saxon is probably less vulnerable than the "Snatch" Land Rover (in certain respects), this additional death underscores the vital need for better protection.

There is no "hearts and minds" issue here, as the unit to which Bland was attached was the Motor Transport Troop, responsible for force protection and movement of personnel and vital stores around Kabul. As the vehicles are largely confined to the main supply routes, neither is size an issue – as indicated by the use of the Saxon which has similar dimensions to the Ridgeback.

Another dimension to this is that, while Kabul has been relatively quite until recently, it seems as if the Taliban are escalating their campaign in the area, specifically targeting supply convoys – a tactic which includes picking off vehicles all the way along the route into Pakistan.

However, it is not only supply convoys which are at risk. Ranger David Pepper of the Royal Irish Regiment was among six soldiers wounded when an IED hit their "Snatch" Land Rover last month, when they were on patrol in Sangin. His mother, Jacqueline Pepper, said their lives had been saved by an "act of God" after the vehicle had "split in two". Pepper was driving the vehicle and, reportedly, the gearbox below him took the blast.

In a separate incident, also last month, a Territorial Army sergeant with the 3rd battalion of the Princess of Wales's Royal Regiment suffered multiple injuries when his WIMIK was hit by a mine "on the way out of enemy territory" in southern Helmand Province three weeks ago. 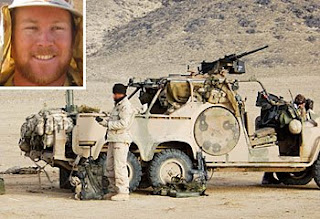 July also saw the death of Australian soldier Sean McCarthy killed in a six-wheel Long Range Patrol Vehicle (LRPV), based on the Land Rover Defender Series – not dissimilar to the WIMIK. McCarthy was the second Australian soldier to die in a LRPV. In February 2002, SAS Sgt Andrew Russell was riding in his LRPV when it hit an old Russian anti-tank mine.

Now, perversely, with 24 Australian Bushmasters being supplied to the British SAS - and the Dutch Army having ordered another 13, with another European Army (believed to be Spain) expressing interest in acquiring some - their Australian equivalents are buying 30 six-wheel versions of the Jackal, to be named the "Nary". It is said to be unarmoured, a move that has not met with universal approval. One ex-SAS officer complained, "Wherever you go in Afghanistan you are seen and people can blow you up. How can so little have changed in six years?"

What clearly has not changed – or not enough – is the military attitude to MRAPs. Although the US is in the throes of complete conversion to protected vehicles, the number being bought by the UK is still insufficient – and late. On the other hand, some in both the British and Australian forces, in their advocacy of the Jackal, still believe that protection comes from mobility, speed, greater off-road capability, lower profile and an ability to fight.

No one, though, seems to have told the Taleban this.