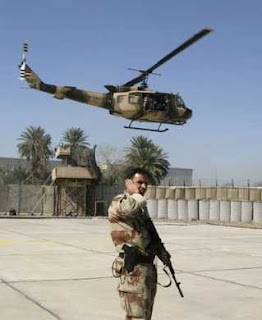 According to a Reuters report, last weekend was a good one for the newly re-emerging Iraqi Air Force, which took delivery of five "Huey" helicopters, the first of a batch of 16 donated by Jordan.

They have been refitted with modern avionics and new engines in the United States at a cost of $3.5 million each, funded by Washington. Fitted with Kevlar armour and missile defence systems, the full upgrade makes them, effectively, new aircraft.

The remainder of the batch is expected to arrive in July and, by the end of the year, the Iraqi Air Force will have 50 to 60 helicopters, including 28 new Russian aircraft. This is very substantially more than the RAF is able to field in the region - and at an extraordinarily economic price. To refit each Huey cost $3.5 million which, says Reuters, compares to $5.9 million for a new Black Hawk configured for the US Army or $5.5 million to $7.5 million for a new Russian MI-17.

Compare those prices with the Future Lynx that the MoD intends to buy, at £14.2 ($28) million each (average price).

And, if that is capability on the cheap, the Iraqi Air Force does even better with its growing fleet of fixed-wing surveillance and utility aircraft. One type operated is the Australian-designed and Jordanian-built SB7L-360 Seeker reconnaissance aircraft (above), a bargain at £450,000 each, fully equipped. This is a single-engine, two-man, high-visibility aircraft fitted with high-resolution surveillance systems, which are capable of providing live observation feedback to ground forces and additionally carry digital video recording hardware and other reconnaissance technology.

Then there are the SAMA CH2000 MTSA (Military Tactical Surveillance Aircraft) (above). They are based on the Canadian design of the Zenair Zenith 2000 and are assembled by Jordan Aerospace Industries in Amman. The aircraft are fitted with a forward looking infra-red imager, a daytime TV camera capable of detecting a man-sized target at two miles range from 2,000ft, and a full military communications suite.

At only just over £363,000 each, these offer exceptional value to an emerging air force. 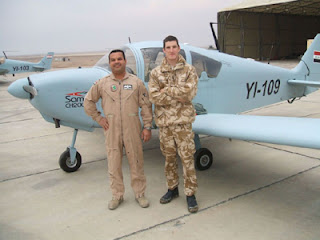 Interestingly, some of these aircraft operate from Basra Air Station. And, while one can immediately imagine any suggestion that we might acquire some would be treated with disdain, it is germane to note that they have been used recently to support British forces operating in Maysan province, carrying British Army observers (pictured).

This points up the increasingly bizarre attitude of British procurement officials who seem so wedded to buying equipment with all the "bells and whistles" that we end up not being able to afford enough kit to support our operations. We thus have to rely on our allies who are able to provide the very support we lack, with equipment that costs a fraction of what we ourselves pay.

Somewhere in the corridors of the MoD, there is someone who needs to be banging a few heads together and starting to demand value for money. Methinks his name is Lord Drayson.