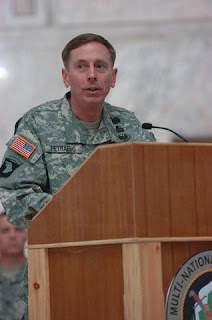 As we reach the fourth anniversary of the invasion of Iraq, the airwaves are full of wailing and gnashing of teeth as the moonbats debate the merits or – more usually – otherwise, of the military action. Given less attention – and much less than it deserves – however, is another debate, this one on how the military should gear up to fighting and winning the wars in Iraq and Afghanistan.

For the Americans, that debate has been underway for some time and, yesterday, the AFP agency acknowledge the outcome, with a piece headed: "War remoulds army into boots-on-the-ground counter-insurgency force".

The US military, it says – citing "analysts and military officials" - is strained and stretched by the bloody conflict, but it has been forced to adapt and relearn how it fights its wars.

General David Petraeus (pictured above), the new US commander in Iraq, spent the past year writing the Army's first counter-insurgency manual in two decades, reviving a military art that had been all but lost after the Vietnam War. Troops are training for urban combat at mock Iraqi villages in the Mojave Desert, and counter-insurgency is the subject of the day at military academies and in the pages of journals. A new generation of combat-tested military leaders is in command.

But the agency also reports that "some generals worry it [the US Army] may lose its edge in fighting high-tech conventional wars," a fear very much reflected in British military circles, not least by Air Chief Marshall Sir Michael Graydon (retd), who we recorded saying that "We mustn't fall into the trap of becoming a peace-keeping militia." He declares: "An ability to conduct full-scale military operations is the foundation for successful peace-making and peace-keeping."

Equally interesting is that many of the arguments that emerged during the Vietnam era – especially over the use of airpower – were never really resolved. Yet, if they are being re-addressed by the Americans, so far in the UK the debate has not really taken off - at least, not in public.

One element of that debate is about (or should be about) the costs of technology, which is getting so expensive that even wealthy countries like the US have difficulty in affording it. Another is that the increasing sophistication and performance of military hardware, which is now out of balance with the primitive nature of the enemy that is being fought. 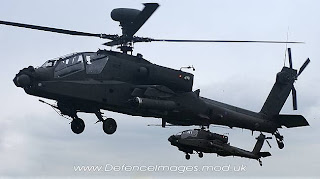 The classic example of both elements is the Apache attack helicopter (pictured right) which, in British hands, ended up costing £60 million each. A hugely complex machine designed for killing Warsaw Pact tanks on the plains of northern Europe, it is now being used to kill Taliban fighters who are able to field nothing more sophisticated than 4x4 pick-up trucks and ancient Russian machine guns.

What needs to emerge from the debate is the definition of military equipment which embodies sufficient capability to do the job yet which is sufficiently affordable to permit the purchase of enough units to meet operational demands. There is no point having equipment that is capable of meeting all contingencies which ends up being so expensive that not enough is bought, or it is too expensive to use.

To this problem we have alluded in our piece yesterday when we pointed out that hi-tech MX-15 optical surveillance equipment is at the moment carried by a variety of platforms, ranging from the Nimrod MR2 and the Merlin helicopter, to the Iraqi Air Force Sama 2000s. More to the point, this same equipment will be fitted to the Future Lynx, which, at an average of £14.2 million per airframe, will end up being used to carry out exactly the same task as the £360,000 Sama 2000. 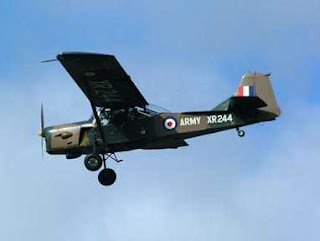 It is in the use of helicopters generally that costs are getting out of hand. Before they became available, many of the functions at present carried out by them were done by fixed wing aircraft, latterly the Auster AOP9 which continued in service until 1965. And while it could not perform all the duties of a helicopter, its short take-off and landing capabilities did allow it to perform air observation, casualty evacuation and utility transport operations. Undoubtedly, something similar could perform many of the duties currently undertaken by helicopters – especially if fitted with the MX-15 optical surveillance equipment – at a fraction of the cost.

Similarly, where helicopters are needed and there is absolutely no alternative, instead of always using Lynx, Chinooks or Merlin helicopters, we could for some of the tasks fly the updated version of the Vietnam era Huey, known as the Bell 412. This costs a fraction of what the other types cost to buy and operate. 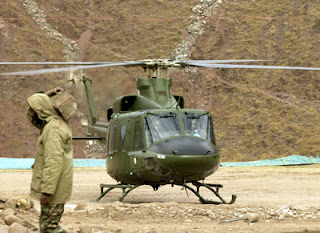 More particularly, the Lynx struggles to operate in the hot conditions of Iraq and, doubly suffers in the hot and high conditions in Afghanistan. There, it has been reported that the extreme heat and thin, rising air of the Helmand desert has limited the Lynx to operations between dusk and dawn, when temperatures fall to acceptable levels.

On the other hand, the "unique abilities" of the Bell 412s include "flying in hot and often humid conditions whilst also being able to carry considerable loads", for which purpose the Army has acquired six military versions which it employs in the predominantly jungle areas of Brunei and Belize – but not in either Iraq or Afghanistan. Unsurprisingly, the Pakistani Air Force, which must operate in conditions very similar to those in Afghanistan, flies Bell 412s. 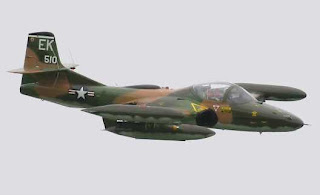 It is not only in the use of helicopters, however, where the debate is needed. When it comes to air support, the role of more economic equipment also needs to be discussed. The USAF went through the arguments extensively in the 1960s as sophisticated, high performance aircraft like the Phantom became available. Too fast to allow accurate delivery of close air support, and so large that it presented an inviting target to ground fire, cheaper and more effective alternatives were soon employed. Amongst those was the piston-engined Skyraider and the T-37 basic trainer (pictured), which became a potent warbird.

About the same time, the British equivalent, the Jet Provost, was upgraded to become the Strikemaster, giving good service in the Oman insurgency, alongside Hueys which were able to operate in the desert heat. 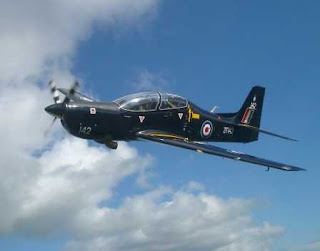 For our air support in Afghanistan, however, we operate Harrier GR9s – upgraded versions of the GR7 – hugely expensive machines with limited payloads. Their one advantage is the ability to make vertical take-offs and landings, but neither of these attributes are used. For the type of support needed in the region, the Tucano used by the RAF as a basic trainer could do the job. And, at £5 million, per aircraft, the cost is less than that paid to convert a GR7 to GR9 standard, allowing us to buy many more.

What does emerge from this is that money is not always the issue, and despite claims to the contrary, the Armed Forces are not actually short of money for equipment – buying better, as can be demonstrated with the Bell 412, can also mean buying cheaper.

Getting in the way though is the determination of the military to buy those increasingly expensive and complex "toys". For the UK to afford to go to war - and win - this process must be reversed.

Thus, in a similar contest, said Ed E. Heinemann, designer of the B-26 Invader, the A-1 SkyRaider and the A-4 SkyHawk: "The obstacles to any simplification may seem insurmountable, and the reasons for more complexity are many and powerful. But if we permit this Frankenstein of complexity to continue to work at its current plodding, insidious rate, it will slowly overwhelm us to impotency."