As expected, Airbus Chief Executive Louis Gallois yesterday announced his much delayed "Power8" plans to restructure his ailing company, shedding 10,000 jobs in the process. The jobs comprise 5,000 directly employed staff and 5,000 workers contracted from other firms and redundancies will be phased over the next four years. Additionally, Airbus intends to sell all or part of six factories.

Most of all though, Gallois railed against the "nationalist infighting" that had dogged the company from its inception, a "poison" that threatened to destroy it. "We need to be interested in the future of Airbus and for that we need to be one integrated company," he said

Despite the unions having been fully involved, and a careful spread of the job cuts to ensure equity between plants (to the detriment of the overall restructuring), there were still protests at Airbus factories in France at Meaulte and St. Nazaire. Jean-Francois Knepper, chairman of the European works council warned that there would be strike calls. But, he said, "perhaps a strike is not enough," 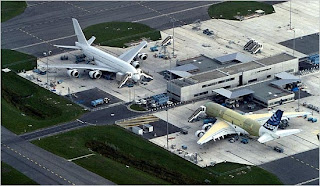 Britain is to lose 1500 jobs, but the plant in Filton, near Bristol, is being given extra work, making carbon fibre composites for the wing of the A350. Other deals include setting up the main plant in Toulouse, France, for sole assembly of the A350 while the Hamburg plant will build the smaller A320.

These, however, are only the headline issues. Gallois is also committed to slashing operating costs, targeting reductions of € 2.1 billion from 2010 onwards and additional € 5 billion of cumulative cash flow from 2007 to 2010. Although much of this will come from reducing the headcount, operational efficiencies are also needed.

Therein lie some of the risks, as Airbus is considered by some commentators to be light on engineering and development skills, and is hard pressed to manage the A380 remedial work, the A350 redesign and the ongoing development for the military airlifter, the A400M. 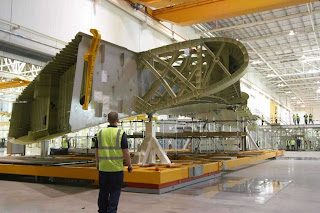 Some of the slack will be made up by outsourcing some of the structural development and manufacture to risk-sharing partners, which will roughly double, while "lean manufacturing" is planned in the remaining plants, bringing expected productivity increase of 16 percent by 2010.

Yet, despite Gallois wanting to leave national infighting behind, he has been forced to maintain inflexible national work-share arrangements, which suggests that he has not yet got a complete grip on the company with is dominated by Franco-German politics, so much so that both Merkel and Chirac had to be consulted over the job cuts

The proof of the effectiveness of the changes, however, will be in whether the company can claw back some of the business it is losing to Boeing, and make up time on some of its projects. Little can be expected of the A380 but, in the wings, serious decisions are awaited as to the fate of the A400M, which looks like coming in late, overweight and short on range and payload.

Far from being out of the woods, therefore, Airbus may be heading for even more stormy waters, with its troubles only just starting.