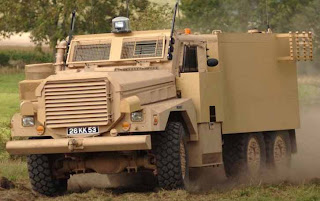 Ironically, it seems, the girlie agenda espoused by the Tory front bench has been exposed by Tobias Ellwood, the Tory MP for Bournemouth East.

While Gerald Howarth was pursuing his fatuous agenda on transport aircraft charters, Ellwood – an ex Royal Green Jackets officer - was asking the secretary of state for defence how many Cougar and Vector Pinzgauer armoured vehicles were being sent to Iraq Afghanistan and when they were expected to arrive.

Alongside the 5 December answer about which Thomas Harding got so excited, defence minister Adam Ingram responded thus:

On current plans half of the Mastiff (the UK variants of the Cougar) vehicles will deploy to Iraq, the remaining half will be split between Afghanistan and a training pool of vehicles retained in the United Kingdom. The first batch of Mastiff vehicles is on schedule to arrive in Iraq by the end of the year. 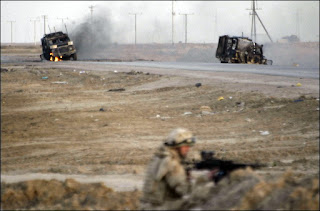 This, as we indicated, was on 5 December and still there is no sign of the Mastiffs arriving in Iraq. More to the point though, the minister is re-writing history. When the procurement of Mastiffs was first announced by Des Browne on 25 July, he stated that they were, "...expected to be delivered to Iraq and Afghanistan in batches over the next six month rotation, with an effective capability in place in Iraq by the end of the year."

Yet, with no sign of a "effective capability" in place, their deployment is more than an academic issue. Troops may well die for lack of them in place. And today, AFP issued another photograph of burning Land Rovers, reminding us of what is at stake. (Are they trying to tell us something?). One might say, in this context, that Liam Fox - in concentrating on leaky toilets rather than Army equipment - is piddling while Rovers burn.