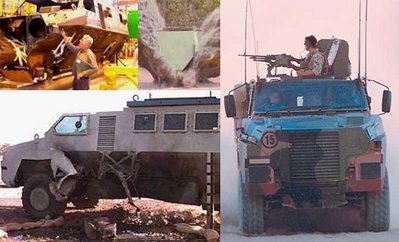 The Financial Times is reporting that Taliban minelaying tactics are worrying Nato. Forces are equipping themselves with more mine detectors amid fears that the Taliban are laying mines as a tactic to demoralise troops. 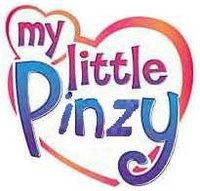 The MoD has placed orders in recent weeks with SDS Group, a UK company specialising in security training and equipment, while British officers warn that the Taliban are planning a variety of tactics aimed at maximising casualties to put new pressure on the UK-led Nato forces.

Mines stockpiled in the civil war and the Taliban era are being laid to target British troops operating in Helmand province and against Canadian forces deployed in the Taliban hotbeds of Panjwai, Zhare and Maiwand west of Kandahar city. 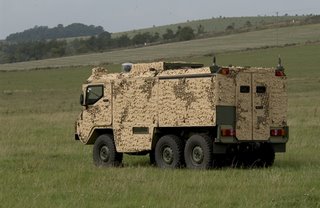 Of course, in addition to mine detection kit, the Canadians also have their RG-31 mine protected vehicles, while the Dutch and the Australians have their Bushmasters – pictured above. The composite shows the "V-shaped" hull during the manufacturing stage, the assembly being tested with explosives and a surviving hull after a mine test.

And, in order to meet this threat, our own soldiers are also to be provided with an armoured vehicle – the Pinzgauer Vector. Alan Stanley, the managing director of Guildford-based Pizgauer Ltd, is confident that the new vehicle "will provide greater protection, mobility and payload than those currently offered by other in-service patrol vehicles" - despite its flat base and driver position over the wheel. 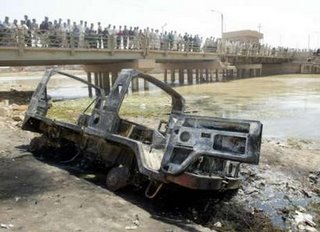 Oddly enough though, we cannot find any photographs of a Pinzgauer having been tested against a mine threat, and Mr Stanley is somewhat reticent about revealing the precise level of protection afforded by his vehicles.

However, we did find one picture of a British Army Pinzgauer having just completed its service in Iraq (above). We suspect that after the Vector is introduced early next year, it will not be long before we will be seeing similar scenes.

It is so nice to see the British prepared.