This does not look good 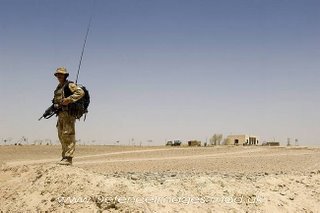 It must have been a slow news day yesterday because Sir Richard Dannatt, the Army's new Chief of the General Staff, stayed on most of the day's television news bulletins, springing to the defence of the RAF after Friday's attack on it.

Oddly though, Dannatt did not even hint that the Major who made his complaints about the RAF may have been mistaken – and been complaining about the wrong air force. And it is doubly odd that not one single news station (or newspaper) which reported on the affair has mentioned this. Clearly, the Major's complaints supports the media narrative that "our boys" are ill equipped and under-strength, so to cast doubt on the man would have reduced the authority of his report.

But this superficiality is getting serious. When it comes to news on Afghanistan, we as a nation are dangerously ill-informed, in two key areas – firstly, the general strategic position and, secondly, over the possible course of events during the winter.

To get some insight into the strategic position, one has to turn to a piece in the Canadian Globe and Mail and an account of the recent "Operation Medusa", another Nato operation which has been coming to a "successful" conclusion, this one in the neighbouring Kandahar province.

Headed, "Inspiring tale of triumph over Taliban not all it seems," the piece is written by Graeme Smith and it does not make for happy reading. Officially, the operation has been declared a success. A thousand Taliban have been killed, others have been routed and villagers are welcoming the return of government rule. Military officials say the operation may have destroyed up to one third of the insurgency's hardcore ranks.

But, writes Smith, interviews with tribal elders, farmers and senior officials in the city of Kandahar suggest a version of events that is more complicated, and less reassuring. The revolt, it seems, has been fuelled by tribal feuds, government corruption and police violence – all of which has been exploited by the Taliban, protecting local inhabitants from the police and government. Thus,

…many of fighters killed - perhaps half of them, by one estimate - were not Taliban stalwarts, but local farmers who reportedly revolted against corrupt policing and tribal persecution. It appears the Taliban did not choose the Panjwai district as a battleground merely because the irrigation trenches and dry canals provided good hiding places, but because many villagers were willing to give them food, shelter - even sons for the fight - in exchange for freedom from the local authorities.

And, although the government has regained control of the district, there are troubling signs that the area may be sliding back toward the same conditions that sparked the violent revolt. Smith tells us:

Unconfirmed reports suggest that Taliban fighters continue to lurk around the district, and that police in the area have resumed the abusive tactics that originally ignited local anger. Farmers say gangs of policemen, often their tribal rivals, have swept into Panjwai behind the Canadian troops to search for valuables. They have been described ransacking homes, burning shops and conducting shakedowns at checkpoints.

This will come as no surprise to anyone with even the glimmering of understanding of Afghan politics and history. This current situation always had to be much more complex than a simple "biff-bam" punch-up between Nato "goodies" Taliban "baddies", to be reduced to "Boys Own" style comic strips by a supposedly serious newspaper like The Sunday Times (below). 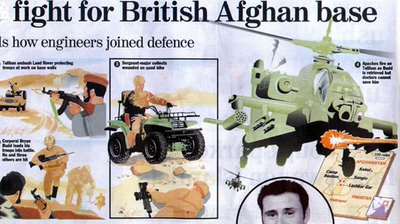 In this context, while we hear from the likes of defence secretary Des Browne and now from General Dannatt that the "Taliban" is proving to be a more difficult adversary for British troops in Afghanistan than expected, no one in the British media has sought to offer an explanation as to why the resistance is so strong.

We can, however, glean something of the same dynamic, as described by Smith from the piece earlier this month about the resignation of Captain Leo Docherty.

A former aide-de-camp to the commander of the British taskforce in southern Afghanistan, he has described the campaign in Helmand province as "a textbook case of how to screw up a counter-insurgency". His view is that, "Having a big old fight is pointless and just making things worse." He adds:

All those people whose homes have been destroyed and sons killed are going to turn against the British … It's a pretty clear equation - if people are losing homes and poppy fields, they will go and fight. I certainly would.

Docherty also observes that Nato lacks the capability to carry out development work and this can only reinforce what seems to be the growing impression that Nato troops are simply another version of the Soviet invaders, an occupying military force supporting a corrupt, murderous regime.

As to the second issue, we have heard from a number of media and other commentators that, with the onset of winter, hostilities will slacken off, given Nato forces – and especially the British – time to re-group and rest.

However, as numerous accounts of the Soviet invasion show, this is a myth (see here, here, here and, especially here).

In the south – unlike the north – temperatures do not fall precipitously but the weather generally does make flying more difficult and dangerous, especially for helicopters. Effectively, for sophisticated armies, logistics become much more difficult and the balance of tactical advantage shifts to the insurgents.

Far from diminishing over the winter, therefore, Nato forces can expect attacks to intensify and, given the extreme difficulty the British already have in supplying their forces, we could see a major disasters just at a time when we are schooled by the media to expect it least.

Putting the two together, it would seem that – far from entering the region to spread peace and democracy, our troops are blundering into tribal wars, where government forces themselves are tribal protagonists. By supporting the government, far from defeating the Taliban, we are creating allies which, over winter may take advantage of an improved tactical situation to strike back with a vengeance.

Whichever way you play this, it does not look good and the media, as always, has lost the plot.