From the press coverage of the Snatch Land Rover litigation, on which a judgement in the High Court was handed down yesterday, you would think that the case against the MoD had been lost. It hasn't. The campaigners trying to bring the Ministry of Defence to book, for knowingly fielding dangerously vulnerable equipment in Iraq, have won a qualified victory.

The impression that the case was lost comes from the misleading headline on the BBC report (above), but this owes its origin to a similarly misleading report from the Press Association, which completely misrepresents the situation.

The essence of the flawed report, which has been replicated hundreds of times in local and national media, is that "a High Court judge has blocked attempts by families of four soldiers killed in Iraq to seek compensation from the Government".

The soldiers concerned were Pte Phillip Hewett, of Tamworth, Staffordshire, Pte Lee Ellis, of Wythenshawe, Greater Manchester, and Lance Cpl Kirk Redpath, 22, of Romford, Essex, all of whom were killed in Snatch Land Rovers, and Corporal Stephen Allbutt, 35, who was killed by "friendly fire" after his Challenger was hit by another. 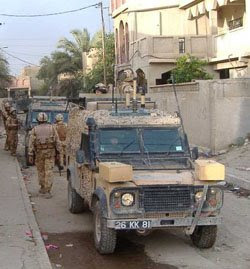 Relatives, we are told, said the MoD failed to provide armoured vehicles or equipment which could have saved lives and should pay compensation. MoD lawyers, on the other hand, "said decisions about battlefield equipment are for politicians and military commanders and asked the High Court to stop compensation claims going forward". Then, says the report, "Mr Justice Owen ruled in favour of the MoD".

However, to project – by juxtaposition – that the judge accepted this particular MoD argument is simply false. As a spokeswoman for relatives' lawyers made clear, this was the MoD relying on the principle of "combat immunity", which removes any liability for exercising a "duty of care" in combat zones.

Here, the judge broke new ground. He refused to accept the principle, allowing Courtney, aged 10, daughter of Pte Lee Ellis, to proceed with a case of negligence. Similarly, the Challenger "friendly fire" case has been allowed through.

Where the Press Association had got itself confused is that there were two separate legs to the case. The first was the group of relatives, including Sue Smith, mother of Pte Hewett, who were not dependents, collectively seeking to make the MoD "... accountable for allowing their loved ones to go into combat in vehicles that were manifestly unsuitable for the job".

Because they were not dependents, they have no claim under common law and cannot seek damages for negligence under duty of care provisions. Before anyone can pursue a claim, the law requires them to prove they have suffered financial loss, which the relatives cannot or will not do.

Thus, this group of relatives have instead proceeded under Human Rights legislation (ECHR) and, since even that requires compensation to be claimed, the cases have been lodged in terms of the relatives seeking damages. However, as the entire group have constantly pointed out - articulated by Sue Smith - they are not interested in the money. This, in any case, is likely to be minimal, and soaked up by legal fees and repayment of legal aid. The relatives simply want the MoD brought to book.

Now, it is the ECHR leg of the case that has been blocked - on the grounds that the deceased soldiers were outside the jurisdiction of the UK at the time of their deaths because they were not in the UK nor on a British Army base. Therefore, it is held, the ECHR does not apply.

That the ECHR case would be rejected was actually an expected development, especially after the Jason Smith case. When I spoke to Sue Smith after the judgement, she was not at all dismayed. There are other, different cases being heard which may settle this point – or these cases themselves may end up in Strasbourg.

But on the negligence issue, ground really has been broken. And, for once, the loss-making Guardian has got it right, a distinction shared by the Belfast Telegraph. Both note that, relying on the principle of "combat immunity", the ministry had argued that this was a complete legal defence for incidents that took place in war zones.

The judge, says the papers, disagreed. In The Guardian, he is cited as saying: "There can be no doubt that the [MoD] is under a general duty to provide adequate training, suitable equipment and a safe system of work for members of the armed forces". Thus Courtney's claim, plus claims by Cpl Allbutt's widow, Debi, and Dan Twiddy and Andy Julien – two soldiers injured in the Challenger - could continue.

Before all the misleading publicity, a ministry spokesman had declared that: "The courts have upheld our arguments on Article 2 of the ECHR. We will be seeking leave to appeal against the decision about liability claims for equipment provision".

Latterly, Sky News got the news mostly right – but still with a misleading headline. The Mirror became a late entrant, correcting its earlier story - as did the Mail, while The Sun continues to get it wrong. Interestingly, the Failygraph does not carry a report at all.

Nevertheless, the manoeuvring continues. Those who lost their lives in Snatch Land Rovers – as well as the Challenger set - are one step closer to getting their day in court. Unfortunately, due to the bulk of the media and its churnalism, most people will never realise what has happened.