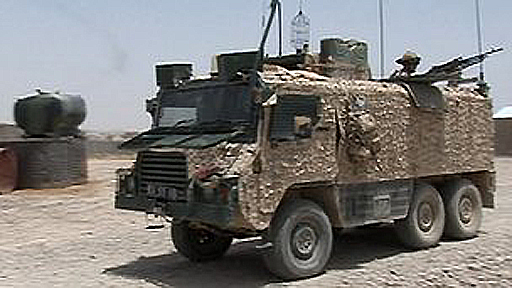 The past reaches out to bring back unwelcome memories, this time the fate of Acting Corporal Marcin Wojtak, who died on 1 October 2009 when his Pinzgauer Vector drove over a 40lb IED close to Camp Bastion, in Afghanistan.

An earlier report tells us that the Vector had been part of a three-vehicle convoy which had just left a wadi and moved onto higher ground, when it was blown up by the device, comprising "20-25 kilograms of home-made explosives buried about 40cm under the ground".

Now, over two years later, an inquest found yesterday, predictably, that Wojtak was "unlawfully killed", leading to a number of reports in the MSM. 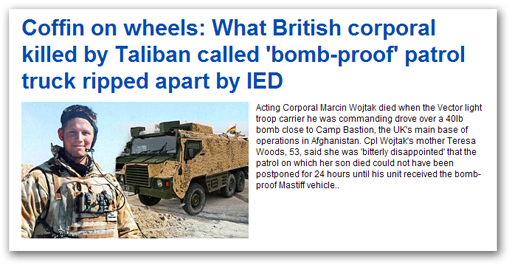 Not untypical of the reports is the story in the Daily Mail which has Wojtak's mother accusing the Ministry of Defence of a "catastrophic failure". Vectors, says the paper (now – although not at the time) were notoriously vulnerable to roadside bombs because of a lack of armour on the underside, and the Government announced a "phased withdrawal" from front line service in May 2009.
.
But the inquest heard they were still being used five months later when the 24-year-old - who had complained in an email home to his father that he felt "exposed and at risk" patrolling in one - was killed.

In a tragic twist, the inquest was told he would have survived if he had been in the heavily-armoured replacement vehicle he was due to pick up the following morning. The replacement was the Mastiff, which, "when it initially went into theatre, soldiers didn't want to get in it because the feeling was that it was just a truck." But, "after a couple of months the lads knew they were safe as houses", and it became the vehicle of choice.

However, its popularity was not just due to the armour. As Ann Winterton had to remind the Telegraph yesterday, it was "because of its V-shaped hull which is designed to deflect rather than absorb blasts", something which the Vector lacked.

But what made the Vector uniquely dangerous was that the driver position was also over the front wheel, in the centre of the "cone of destruction" ensuring that, if the vehicle drove over a device, any explosion would be unsurvivable. In one of the heaviest mined regions of the world, a more unsuitable vehicle could hardly have been chosen, so obvious were its defects.

Yet Wojtak's mother is probably being a little unfair in blaming the Ministry of Defence, per se, for its deployment. Intended as a replacement for the vulnerable Snatch Land Rover, its particular champion was a famous general by the name of Richard Dannatt, who insisted on its purchase for Afghanistan, as his price for accepting the unwanted Mastiff into theatre in Iraq.

The full, ugly story is in my book. Nowhere else will you see the whole story told of the wasted lives and the waste of £100 million from an overstretched defence budget to buy a vehicle that was so dangerous that it had to be replaced, temporarily, by the Snatch Land Rover, up-armoured and re-named the Vixen.

There can be few other instances where a replacement vehicle was deemed so unsatisfactory that it was eventually replaced by the vehicle it was intended to replace, but that is the legacy of Richard Dannatt. And even to this day, it leaves a bitter taste.