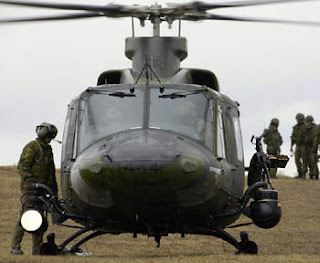 It was Sir Nicholas Winterton's turn at defence questions today (link to follow) when he took up the theme of helicopter availability in Afghanistan.

After his anodyne opener (as is the tradition) with a stock answer from secretary of state Des Browne, he got to the meat, asking whether the MoD had "indicated to any of our armed services its willingness to procure light helicopters on their behalf? If so, what response has it had?"

The question was, shall we say, not ill-informed, the rumour machine suggesting that the military had been offered light assault helicopters – and indeed leased Mi-17s – but had turned them down.

Perhaps conscious of this, Browne volunteered an unexpectedly full answer, telling us:

For completeness, the House should know that to support operations in Afghanistan, the Canadians — I spoke to their Defence Minister recently — have bought six additional Chinooks and eight Griffin helicopters. In the interim, while fitting out those Chinooks for deployment, they are leasing eight Mi-17s. Therefore, the number of frames, and consequently the hours available, will be subject to a significant uplift in Afghanistan.

It appears that the Chinook helicopters are second-hand, purchased earlier this year and due in service, after refurbishment, in 2009. But what is particularly fascinating is the acquisition of the other two types.

The Griffin (sometimes called Griffon) – better known as the Bell 412 – is an upgraded version of the venerable Huey of Vietnam vintage, massively upgraded with two engines and a four-bladed rotor. More powerful than the US Marine Corps UH1N, it is more than adequate for the rigours of Afghanistan.

Interestingly, after announcing these titbits, Browne went on to add:

Gentleman is right that light helicopters play an important operational role, particularly for surveillance purposes, although they can be used for other purposes. The helicopter that we currently use is known as the Lynx helicopter, and he will know that that does not perform most efficiently in the environment of Afghanistan. We look to our allies for such support, but for that surveillance role we also use the heavier Sea King helicopter, which, when rebladed, performs well in that environment.

So, we have an unusually frank admission that the Lynx is not adequate and that, for what should be the role of a light helicopter, we have 10-ton Sea Kings in service.

This gets all the more interesting when one learns that the Canadians are acquiring their Griffins to carry out the armed surveillance and convoy escort roles, fitted with the latest version of the Wescam MX-15 surveillance turret and – we think – door mounted machineguns.

Whatever the limitations of the machine – and there are a few – it is reasoned that, in this role it will carry only a crew of four, against its notional capacity of 12, which gives it ample reserve power to cope with all but the most extreme conditions. And, to resolve the logistic support problem, they are to be maintained under contract by the original manufacturers, Textron. 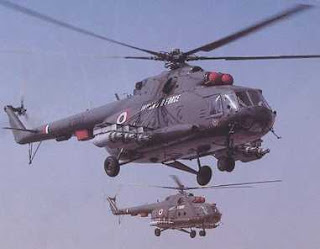 As to the Mi-17s, we have long argued that these would be a valuable asset in theatre and, while again, there are obvious limitations to their deployment, we remain to be convinced that, with suitable defence equipment, they could not perform a valuable service, taking some of the pressure off the hard-pressed Chinooks.

On this, the debate was assisted by Nicholas Soames, who asked the secretary of state whether he had given any thought to the substitution of civilian helicopters to carry out conventional logistics tasks, so that more military helicopters could be freed up to go to Afghanistan.

The answer, again, was helpful:

I have done just that. As I believe the hon. Gentleman knows, we have entered into a contract in Afghanistan with a civilian supplier. As a result we are on track to move some 300 metric tons of supplies around Afghanistan, thus freeing up Chinook time, and time for the necessary deployment of attack helicopters to support the Chinooks. The arrangement has been very successful, and I am sure that we can build on it.

The last sentence holds a promise of more to come, and the revelation that the Canadians are using the Mi-17s (aka Mi-8 MTV) plus the Griffins can only strengthen the arm of those who argue that our own military should be similarly equipped.

Whatever difficulties there might be in deploying these types, the fact now that they are in – or about to be – in theatre, working under very similar conditions to which are own forces are exposed, suggests that there is now really no excuse for us not to follow suit.

All the indications are that the political will is there and the Canadians are demonstrating that there is both a role and that technical difficulties can be overcome. It is now down to the military to exhibit some of their famous "can do" attitude and seriously address the helicopter shortage without calling for the best solutions every time. The best must not be allowed to become the enemy of the good.