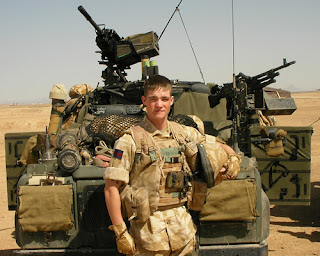 It should not pass without comment that the latest soldier to die in Afghanistan, Guardsman Neil "Tony" Downes from the 1st Battalion Grenadier Guards, was riding in a WIMIK Land Rover. His vehicle was hit by a roadside bomb.

Four other soldiers were injured, although it is not clear whether these sustained their injuries as a result of the blast, or from the subsequent exchange of fire with the Taliban.

It is not the function of this blog to second-guess the cause of death of every British solider killed either in Iraq or Afghanistan, and it is a matter of sad inevitability that, when soldiers are engaged in combat operations, some of them will be killed.

But we would be remiss if we did not remind readers that we have remarked before on the fragility of these lightly-armoured Land Rovers (plus here and here), and that the Canadians, Dutch, Estonians, Americans and Germans (to say nothing of the French and Italians) have armoured patrol vehicles capable of resisting roadside bombs.

Unless the MoD is going to tell us that there had been no possible alternative to the WIMIK in the particular circumstances of Guardsman Downes's death, then there is a case to be made that this is yet another sad, unnecessary fatality, occasioned by the inability of the Army to equip its troops properly.