You can't have everything 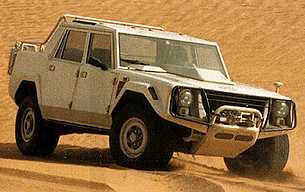 It is perhaps a refection of my totally distorted news values that the most interesting article I found today in the press was the Sunday Telegraph piece reporting that: "Soldiers forced to shout 'bang' as the Army runs out of ammunition".

This contrasts rather neatly with some bizarre information unearthed by one of our readers (thank you) about the British Army's new Command and Liaison Vehicle, the Panther, subject of our previous posting.

It turns out that this grossly over-priced piece of Italian machinery, a cool £413,000 each – even before you add the "go-faster" accessories and the machine gun – is based on the Lamborghini LM002. This was a failed attempt by the parent company Fiat to capture the US military light utility vehicle market, that was eventually taken by the General Motors Humvee. 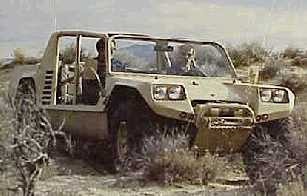 Having failed to interest the Yanks, the LM002 re-emerged as high-priced boy-racer "wheels", a version of which was marketed in Russia under the name of "Rambo", illustrating perhaps its intended market.

It then metamorphosed again to become an Italian Army runabout, complete with its three-litre engine, six-speed, automatic racing gearbox and all the trimmings, and thence to the FCLV contender. No wonder the boys in the MoD loved it. Now the brown jobs can go racing around the countryside in their glamorous new "wheels", at a cost to the taxpayer of half a million quid each – by the time the accessories have been added, and the tank has been filled.

And of course, adorning the rig is the latest "must have" fashion accessory, the "Enforcer", remote controlled weapon station, fitted with a 7.62mm or 12.7mm machine gun (Doncha just luv the macho name).

Of course, given the parlous state of defence spending, the MoD won't be able to afford any ammunition for it, so the brown jobs will have to tear around in their shiny new Lamborghinis shouting "bang! bang!" at the nasties. But then, if you are shelling out near-on half a million quid for your "wheels", you can't have everything.