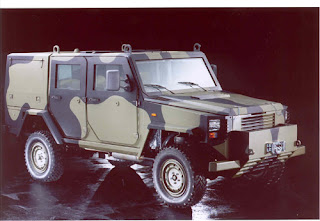 At the risk of offending some of our readers, who might prefer shorter, snappier posts and a diet of trivia, we return once again to the saga of the MoD procurement of the British Army "Panther" vehicles, featured in yesterday's post - with some truly mind-blowing additional revelations.

As we left the story, the MoD had pushed a British manufacturer, in preference to its own product, to enter the Italian Iveco Panther into an MoD trial aimed at selecting the best Future Command and Liaison Vehicle (FCLV), after the short-list had been closed and the competitors had already been chosen.

Then, against world class competition, this untried, untested design was selected – by the same MoD which had insisted on its inclusion. It then went on to order 401 vehicles at a cost of £166 million - working out at £413,000 each – with an option for another 400 vehicles. Afterwards, it pretended that they were British-built, until forced to admit that the vehicles were wholly Italian-built, with the exception of minor roof modifications (necessary to fit a machine gun).

In our previous post, we also observed that, at the time, the clear favourite – which was expected to win the order - was the South African built RG32M, produced by a company which now calls itself Land Systems OMC, previously owned by Vickers Defence Systems and now a subsidiary of BAE Systems – the premier British aerospace and defence manufacturer.

What we lacked, when this post was written, was any idea of cost comparison which, in the defence equipment sector, is notoriously hard to obtain. However, with further research, the Swedes have come to our rescue as it now transpires that in May of this year, the Swedish Defence Force placed an order for 102 RG32s.

Interestingly, the version supplied - the RG32M, the same model as intended for the British Army - had been extensively customised to meet customer and regulatory quality standards, including "homologation" for Sweden and Europe. Modifications included changes to axles, wheels and tyres, bonnet and louvres, steering wheel and instrument panel. The vehicle was also given "winterisation" for Sweden's –35°C temperature extremes.

But what is absolutely devastating is the cost, the total contract coming to "almost" 180 million Rand. At current conversion rates, this equates to a contract value of £15.49 million, working out at £152,000 per vehicle as opposed to £413,000 for the Panther. On a directly equivalent basis – without any discount for quantity – buying 401 RG32Ms would have cost the MoD £60.78 million, as against the £166 million it is paying for the Italian vehicles. 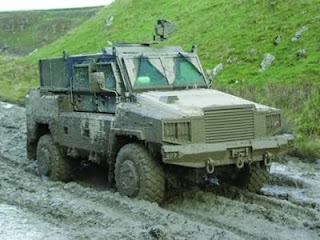 Now – as we all know - cost, especially in terms of military equipment, where performance is crucial, is not everything. If there were significant performance benefits to the Panther, then there could be a case for buying the more expensive vehicles.

Here, however, it must be recalled that, at the time of the selection, the Panther was a new, untried vehicle, with no combat record. That is not the case with the RG32 and its similar but larger cousin the RG31. With the latter vehicle, for instance, its capability is endorsed by none other than the US armed forces. Despite their notorious reluctance to "buy foreign", in February last they bought 148 vehicles (at £289,000 each, i.e., £124,000 less than the Panther).

The order came after an incident in 2004 in which a RG31 in Afghanistan was destroyed by a mine. Five US soldiers in the vehicle were able to exit with only light injuries. The soldiers wrote a letter of thanks to Land Systems OMC, saying the vehicle had saved their lives. "If it was not for its superior design and manufacturing we would not be able to write this letter today," the soldiers wrote.

Land Systems MD Johan Steyn responded by saying that, "This order simply confirms what we have always known - that in its class the RG-31 is the best mine-protected vehicle in the world." That is what you would expect from the MD of the company that makes the vehicle, but no military expert would disagree. It simply is the best in its class.

As for the RG32, 75 were recently purchased for United Nations use in Kosovo, with a further 20 for service elsewhere, and the vehicle has seen service in Malawi, Mozambique, Georgia, Israel, the Lebanon, Tajikistan and Burundi, attracting the same high reputation and glowing testimonies. 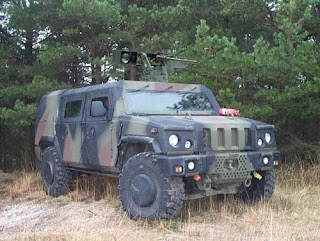 All that affirms that Land Systems has a strong track record, and is an acknowledged leader in mine protection and light armoured vehicles. Furthermore, the company itself has a good record for the "Africanisation" of its workforce. It has an 25 percent local equity partner in South Africa, DGD Technologies (Pty) Ltd, a local "Black Economic Empowerment company". Furthermore, its component purchases support a considerable number of local South African firms, making it a key industry in an under-developed country, and just the sort of enterprise that Tony Blair should be supporting.

Furthermore, when in June 2001, Vickers Defence Systems announced it had won the contract for the MoD assessment phase of the FCLV, being one of three companies paid £500,000 for entering the trials, it offered a choice of the RG31M and the RG32M, stating that the RG31M exceeded the load carrying and mine protection requirements whilst the RG32M offered "the stealth attributes associated with a compact design combined with anti-tank mine protection."

As yet unexplained is, at the time, the MoD's total requirement was for "more than 500 vehicles", and it was offering not a direct purchase contract but a PFI deal – which would have included in-service maintenance, at a total programme value of £370 million. Somehow, in between nominating the shortlist and selecting the Panther, the contract turned into a direct purchase arrangement, with £166 million being allocated to buying outright the 401 Iveco vehicles.

However, had the proven RG32M design been bought, the MoD would have saved the taxpayer over £100 million and if it takes up the additional 400 Panthers on option, the taxpayer will be over £200 million out of pocket.

Looking at the images of the three vehicle (from the top), the RG32M, the RG31M and the Panther, with what we know so far, it is very hard to see an adequate reason why the MoD is, to all intents and purposes, throwing £200 million down the drain on Italian vehicles, manufactured by a firm whose parent FIAT is, incidentally, on the brink of financial collapse.