The politics of denial 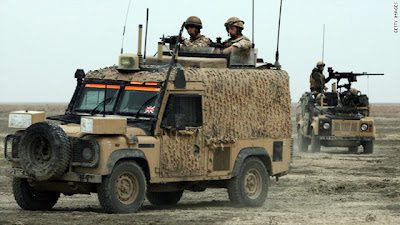 The British formally ends its final military mission in Iraq today – a Navy training operation in the Gulf. Interesting how CNN marks the occasion with a Snatch Land Rover, while Hague says the mission has left Iraq "a better place".

In all probability, Iraq is indeed a better place. But Hague claims too much in taking the credit. The British expedition in southern Iraq was a failure, and only the combined efforts of the Iraqis and the US Forces salvaged something from the wreckage, but not before many people – and especially Iraqis – died unnecessarily.

Ironically, the Snatch Land Rover is the symbol of that failure, representing the inability of the military to adapt to circumstances, and handle a vicious but ultimately beatable insurgency. But to this day, neither the military nor the politicians have to grips with their failures. They are still in denial - a sure recipe for continued failure, of the nature we are currently experiencing in Afghanistan.

Interestingly, the Tories could have started with clean sheet, but they have also bought into the cover-up and are no more able to cope with acknowledging failure than their predecessors. As with so other issues, all we get is the closing of ranks. "Face" is more important to the establishment than success - and certainly more important than the lives of soldiers.