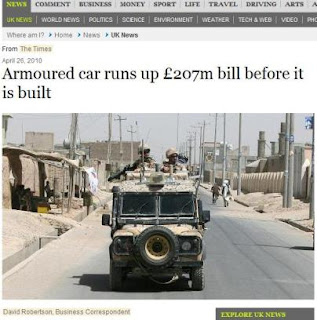 Rather amusingly, The Guardian is letting Monbiot off his leash to have a go at The Times, telling the world that its "exclusive" tale on EU climate targets is "gibberish".

Although Moonbat is largely a free agent, there must be an element of policy involved here, as most newspaper editors are reluctant to allow attacks on other journals. The view is taken that "dog shall not eat dog" in an informal arrangement that binds together the media as a self-serving (and mutually supporting) club.

In that sense, it is good to see Moonbat break ranks – even if one cannot agree with all he writes. Climate change aside, another good place to start would be the defence coverage, breaking into the low-grade and ill-informed coverage that we see all too often. And, once again, The Times would be a suitable target, with a story that could easily qualify as "gibberish".

The headline claim of this story – which sounds so terribly plausible – is that the MoD "has spent £207 million on an armoured vehicle that has yet to leave the drawing board, despite seven years of development." This, it tells us, is the Future Rapid Effects System (FRES) which "was supposed to provide soldiers in Iraq and Afghanistan with better protection against roadside bombs but its development has dragged on and costs have continued to rise."

Here one must admire the skill of the journalist, David Robertson, in getting so many things wrong in such a short passage. Firstly, while the MoD might have spent £207 million on FRES, the very name should warn the unwary journalist to be careful.

The key is in the last letter of the acronym, the "S", standing for "system". FRES is not an armoured vehicle, but a system – one which is extremely complex, sophisticated and innovative. Agree with it or not, the overall procurement budget is provisionally set at £16 billion and, for what is supposed to be part of a revolution in military affairs, the sum of £207 million so far spent is relatively modest.

Secondly, FRES vehicles were never intended to give protection against roadside bombs – neither in Iraq nor Afghanistan. The whole concept was of a lightly armoured, air-portable force which relied on advanced sensors and stand-off weapons to neutralise threats, rather than weight of armour. In fact, it is largely the IED which has so far scuppered the FRES concept.

So keen is The Times to develop its theme of "waste", however, that it then drags in the mine and IED resistant Mastiffs and Ridgebacks, noting that the MoD has spent more than £1 billion on new armoured vehicles such as these, but "these are seen as temporary solutions and FRES was meant to be the long-term answer and become the backbone of the Army’s vehicle fleet."

This is an issue we have rehearsed many times – for instance here - and while it is true that the Army originally sought to make the mine protected and FRES vehicles an either/or issue, they have emerged as entirely separate categories, each with their own distinct operational niches. The Times is offering a distorted and incorrect view.

Interestingly, the paper then goes to the MoD for a view on FRES and then, separately, to 13th Century Fox, as if he was still a member of the opposition. Dr Fox has been firmly in favour of FRES – wanting it introduced more quickly – so he tells us that: "The whole FRES programme is just another example of a procurement programme going over time and over budget. This is yet another reason why the procurement process needs radical reform that only a new government can provide."

And there lies the final inadequacy of a wholly inadequate piece. Where there are indeed problems with FRES, these are not primarily procurement failures. There are serious definitional problems, which will continue as the Army consistently fails to work out what equipment it really needs. If Dr Fox does not understand that – and he mostly doesn't – only the ignorance of The Times is going to get him off the hook.

Unfortunately, on that he can almost certainly rely – unless the media grow some and start picking apart some of the garbage such as this piece represents.