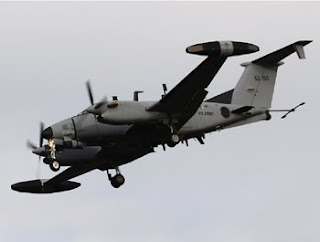 In the dying days of the Bush administration, defence secretary Robert Gates still has enough "reach" to put into practice his thinking on the conduct of modern counterinsurgency operations – and with remarkable speed.

So it was that in April he was addressing officers at the Air University at Maxwell Air Force Base, telling them that the US military needed more UAVs and equipment to collect intelligence and conduct surveillance.

Now, less than six months later, we hear via Reuters that the DoD is planning to spend – in what amounts to a parting gift from Gates - $2.2 billion on additions to its fleet of electronic surveillance aircraft and UAVs.

In particular, it plans to buy another 51 RC-12 Guardrail aircraft, based on the Beechcraft King Air airframe, but equipped with a formidable array of electronic and optical sensors.

These we have met before when, in May 2007 we learnt that the UK was to buy a "small number" of these aircraft for its own use – about which we have heard nothing since (and nor are we likely to – for very good reasons the deployment and movement of these assets is kept under wraps).

However, whether in UK or US hands, these aircraft represent a formidable asset in the conduct of counterinsurgency operations, able to provide high-grade real-time intelligence on Taleban movements, allowing rapid interdiction of groups using assets such as the Reaper, or the vectoring of other air assets or ground forces to take appropriate action.

Once the aircraft slated for order are deployed, their capabilities will be such that there will be very few areas of Afghanistan that will escape continuous surveillance and, with commonality with the British – albeit smaller – fleet, it is not unreasonable to expect a degree of overlap and joint operations.

Reuters suggests that the continuous air surveillance patrols in both Iraq and Afghanistan are to be stepped up with 30 such due to be operating by October, up from 12 when Gates arrived at the Pentagon.