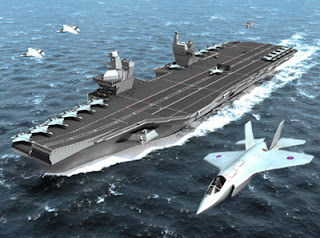 Boring title, but this is what all the posturing has been about, and why Dannatt has been spitting out his dummy.

Announced by Brown in Parliament today, with a comment on the MoD website, Defence is to be awarded an additional £7.7bn by 2011, equating to 1.5 percent average annual real growth (after deduction of the "modernisation fund" allowance in the previous CSR).

In immediate terms, this paves the way for the purchase of two new aircraft carriers, although these have not yet been ordered, and over half a billion is going into improving service accommodation.

However, behind the scenes there is a major rethink going on. While the carriers have survived, there is a fundamental review in progress, examining the costs of major projects, together with a substantial drive to reduce overheads. The latter is aiming at a five percent year-on-year saving in MoD's administrative overhead over the next three years and a 25 percent reduction in costs to the MoD's head office. These are in addition to the £2.8bn in "efficiencies" delivered over the previous spending review period.

On the major projects, one is looking for an acknowledgement that the defence budget is not the plaything of defence contractors, who are grabbing a larger and larger share of the cash, but to fund operations.

It is there that the "creative tension" is bringing the likes of Dannatt to the fore, a man who so much wants to protect his big spending items and his fully-equipped conventional army that he is prepared to see a reduced operational tempo to pay for it.

Interestingly, the debate about where the split should occur between "core army" and counter-insurgency operations is one which is taking place behind closed doors, mainly because the media seems to have no idea what is going on (and perhaps cares less - the BBC has not even reported the announcement), while the Conservative opposition has simply failed to engage.

However, with the headline increases just announced, it will be more difficult to push their "underspend" mantra, when funds are increasing in real terms and Cameron has yet to sanction any increased spending on the forces. Until he does that, and the Tories come up with some sensible ideas of how they would spend it, the debate will go on without them.

It now appears, though, that that would be the least worst option. Leaks from Cameron's "national and international security" commission, chaired by Dame Pauline Neville Jones, is to recommend complete withdrawal of troops from Iraq and Afghanistan. That, at least, would absolve the Boy from finding more money and resolve the "creative tensions". Dannatt could have his new toys and he need not get them dirty, fighting those grubby little insurgents.