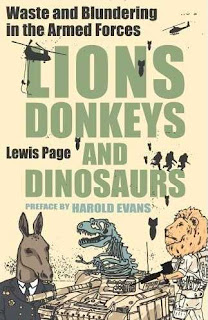 As a labourer in the same vineyard, you would have thought that we would have a great deal in common with former RN officer, Lewis Page, the man who brought us the book Lions, Donkeys and Dinosaurs - which is not always the case.

Although he is a savage critic of the MoD and its lamentable record on procurement, his grasp of detail is sometimes lacking and, as you might expect with a former naval person, his understanding of green "toys" seems rather limited.

However, last Saturday – in an interview with John Humphrys, which has been totally ignored by the media – he was tasked alongside Colonel Bob Stewart with arguing the case for more defence spending. Whatever Page's limitations might be, on this occasion he acquitted himself with honour, putting exactly the points which we might have raised, including his admirably succinct closing line, "Fix the system first, then give it some more money."

So closely in line is this with our own sentiments that we thought is worthwhile publishing the entire transcript of the proceedings:

John Humphrys: When all those retired military chiefs stood up in the House of Lords this week to tell us why the Government has been getting it so wrong with the armed forces and how much more money they needed, everyone seemed to snap to attention. It was a big story. But isn’t that what old servicemen always do – complain that the armed forces aren’t being given enough? Lewis Page, former naval officer himself, now works at the Royal United Services Institute, and he's with me. So is Colonel Bob Stewart, who commanded the UN forces in Bosnia. Lewis Page, you're not persuaded?

Lewis Page, RUSI: No, not really. You can make an excellent case for the idea that the armed forces need more money and that they don't get very much in Government terms, but I suspect if you gave them more money right now to the tune of something politically achievable, some billions of pounds, it would vanish and very little would be achieved.

Humphrys: ... As in buying new equipment?

Stewart: Yes and it seems to be just a black hole and great minds have spent huge amounts of their time and effort trying to sort out procurement. But procurement seems to have a real problem. It’s easy to take a cut when there’s a problem of liquidity in the Ministry of Defence, so actually I understand and accept the argument that sometimes things like equipment costs are huge and get ... [indistinct]. For example, something like the Nimrod, which was – the new Nimrod MRA4 – twenty one were ordered, they were meant to be delivered by 2005, the budget was something like £2.1 billion. Actually they're not going to be delivered until 2010, there's only going to be twelve of them maybe, and it's going to be much more expensive. Don't quote me on those figures, but in rough terms that's, that's what happens to equipment. There, there are excuses of course. The excuses are, when they want an easy cut, they say, "push the equipment further down the time line", and of course for industry that causes havoc because they've got to employ people.

Page: Well, a point of order there in that, when they want an easy cut, what they normally do is shut down combat units actually. You know ...

Page: ... [indistinct] .. You know, there's almost zero political cost to that because young soldiers don’t vote. Even if they did, they'd probably be scattered in postal voting across dozens of constituencies ..

Humprhys: ... Bit of a cynical approach this?

Page: Well, it's what, it's what we've seen, it's what's been happening. And it's not cynicism, it's realism, I'm sorry to say.

Humphrys: So, you're both agreeing then that the armed forces actually don't need very much more money?

Stewart: I'm not agreeing with that.

Humphrys: You're saying they should have more money?

Stewart: Of course they should have more resources and ...

Stewart: Yes, absolutely. I mean, fundamentally, there are huge things wrong, John. I agree, I take the point that some things in procurement terms ...

Humphrys: ... Alright, if you had another five billion tomorrow, what would you spend it on?

Stewart: For a start, accommodation for the soldiers returning, looking after people, giving them the right second and third line ammunition, for example, which is in extremely short supply. The Apache helicopters, apparently, have almost run out of ammunition in Helmand province.

Page: Well, I submit if you ... let us say that you were there at the MoD and five billion pounds turned up in a suitcase or something, you wouldn't get to spend it on those things. It would turn out that it was vitally important that ... [indistinct] .. needed a particular factory that made a certain kind of thing and new factories would spring up. And you would be told that you needed to do this in order to sustain the supply base here in the UK.

Humphrys: So, who in that case, who is controlling it? If that is the case, if you're right. I mean, you would agree with each other to the extent that what Bob is saying – Bob, Bob Stewart is saying – is that the money ought to go on soldiers effectively ... [indistinct] ... and you're agreeing with that, I think, but you're saying actually it wouldn't end up being spent on that ...

Page: Well, this, this is the problem. This is why it can't be easily fixed because you can't easily point to the faulty part ...

Humphrys: ... Well, somebody must take these decisions ...

Page: ... Well, people in the MoD will often say, "Oh well, you know, we're fighting for capability and soldiers and so on, but politicians tell us behind closed doors 'no you will not allow that factory full of UK defence workers to be shut down, you will save that nine hundred jobs, and you won’t talk about it.'"

Stewart: There's huge politicisation of defence and that's also another problem. You can't actually shut down a factory because that's jobs going ...

Humphrys: ... But, I mean, who took the initial decision, say for Eurofighter? Everybody I talk to says, "You know, I find it terrible, what a waste of billions and billions of pounds, nobody wants it, but somebody ordered it."

Stewart: Well, it was done within the Ministry of Defence a long time ago and the people in charge of procurement, the long tradition of them – starting with people like Heseltine, but going back beyond that – they've always said, "We're going to get this right, we're going to sort this out, it's going to be a new way of doing the job", but in fact ...

Stewart: It never is. And that implies that it's almost impossible to fix and I, I take that point. But equally it's quite clear now we need more soldiers to do the job. Each battalion in the infantry, for example, is about seventy under strength. Now, how we fix that, I'm not quite sure, but probably providing more incentive and looking after them.

Humphrys: But in a phrase, Lewis, do you .. Page, you're saying actually, what, because of the decision-making process?

Page: Exactly. Fix the system first, then give it some more money.

What is especially interesting is Page's comments about the "system" and his observations about the difficulty of fixing it, "… because you can’t easily point to the faulty part."

In our own limited and inadequate fashion, one of our own main preoccupations has been trying to explore precisely this issue, with its layers of complexities and subtleties. And, while Page has clearly reached the same conclusion as us – that simply throwing money at the problem is no solution – we are still back in the dark ages where most commentators and the media are concerned. They have not only learnt nothing but have remembered nothing.

Until the debate can move on from this pathetically limited agenda, we will get nowhere at all.